The duo have been going at each other for a while now and a lot of accusations and shocking events have unfolded in the course of the duel. This lawsuit comes shortly after Shata Wale claims the artist manager had a hand in the murder of Fennec Okyere, Kwaw Kese’s manager.

Following the lawsuit, Bulldog in a writ filed at the Accra High Court is seeking damages for alleged defamation and same for malicious publication of falsehood against him made by Shatta Wale.

Meanwhile, the Ghanaian Police Service subsequently opened investigations into the case following the claims by Shatta Wale as regards the murder of Fennec Okyere. The deceased was murdered at his Manet Gardens residence on Spintex Road on Thursday, March 13, 2014. He was 31-years-old. The writ records Bulldog as the plaintiff, and Charles Nii Armah Mensah Jr., known as Shatta Wale alias Bandana, as the defendant.

Among the reliefs sought by Bulldog include;

1. A declaration of the Court that the series of publications made by Defendant as particularised in the Statement of Claim are defamatory to Plaintiff.

2. A declaration of the Court that the series of publications made by the Defendant in the Statement of Claim are malicious. 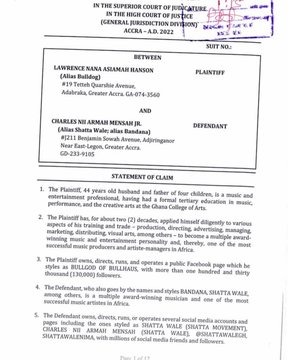 BBNaija: I Miss You, Want You Back – Cross Tells Angel

EndSARS: You Chose To Be A Dictator – Genevieve Nnaji Blasts Wike

Peruzzi Links Up With Olamide In The Studio

Teebillz Celebrates Son With Tiwa Savage As He Clocks 7