African giant Burna Boy redefined the history of African and Nigerian music as he sells out the Madison Square Garden.

Grammy award-winning singer and performer Burna Boy achieved a historical feat for African and Nigerian music as he officially sold out all tickets for his One Night In Space concert set to take place at the Madison Square Garden in New York on Thursday, April 28, 2022.

Burna has continued to prove over time the relevance of afro-beats as well as his importance as an African artist, with numerous sold-out venues all around the world.

Congratulations to the African giant. 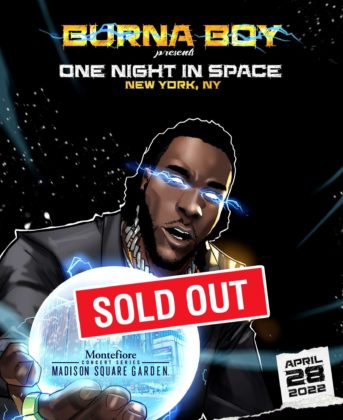 Sarkodie, Stonebwoy, Lil Wayne, Others To Perform At US Music Festival | SEE DETAILS

Ruger Reveals Why He Always Wear An Eye Patch