An excited Nigerian lady has taken to social media to celebrate as she’s expecting a child with her boyfriend, whom her friends had warned would dump her.

In a viral clip, the young lady who hinted that she does not care about her friends’ opinions about her man, mocked them that their prediction was wrong as she’s visibly happy in her relationship and expecting a child with him. 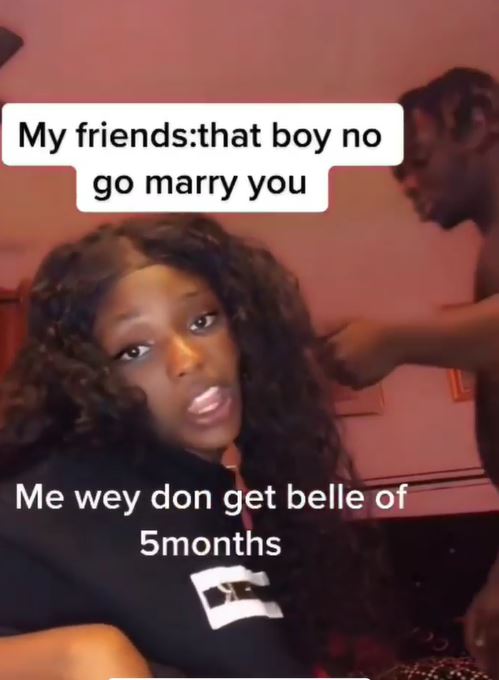 Showing off her what looked like a baby bump, she revealed she’s five months pregnant for her boyfriend.

“My friends: That boy no go marry you.

Me wey don get belle of five months”, she captioned the video.

In other news, a police officer has been caught on tape boldly seeking bride from motorists while reiterating that he does not collect “change”.

In the video that was filmed by road users, the officer and his colleague stopped a vehicle and demanded money from them after inspecting the car papers.

The officer was then offered an undisclosed amount, but he declined it and stated he only collects a large sum.

The bribe-seeking officer also declared that even the IGP knows he collects money from motorists. According to him, the road is his “market” and the commuters are his “customers”.

“Is This Christianity?” – Lady Asks After Her Pastor Chided Her For Sharing Revealing Photo Online On A Sunday