My Dad’s Album Will Be The Best You Ever Heard – Wizkid’s Son, Boluwatife Says

My Dad’s Album Will Be The Best You Ever Heard – Wizkid’s Son, Boluwatife Says

It is no longer news that Nigerian Starboy, Ayo Balogun, popularly referred to as Wizkid is set to drop his long anticipated album.

Boluwatife Balogun, his first son, has shared his thoughts on the impression his father’s soon to be released ”Made In Lagos” album will have on fans.

According to a tweet shared by Tife’s mum, Oluwanishola, the little lad said his father’s album will be the best album so far.

Oluwanishola said Tife asked her to tell Nigerians that Starboy’s forthcoming album is going to be the best anyone has ever heard.

“Tife told me to tell y’all that his daddy’s album is finna be the best you ever heard still… MADE IN LAGOS!!!!!!!!”. 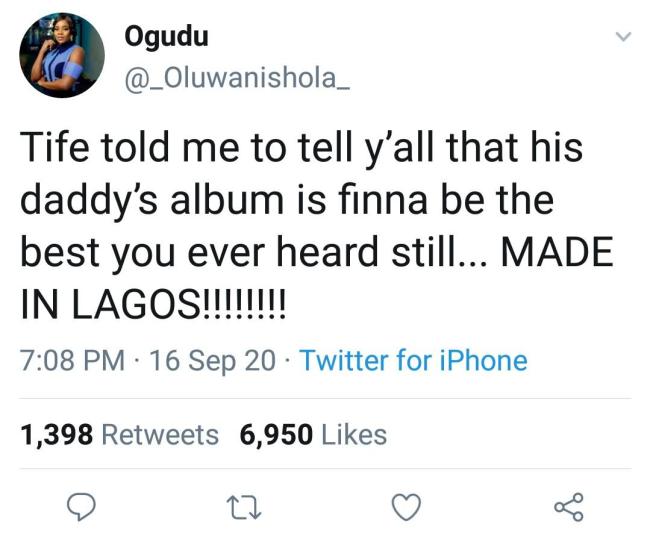 Tinubu My Inlaw, Not Qualified For Presidency – Veteran Flutist, TeeMac

Kwankwaso Reveals Implications Of Obaseki’s Victory – Do You Agree?

Nigerians To Pay More For Call, SMS, And Data Services As FG Announces 5% Increase In Tax

Dozens Of Thai Protesters Injured After Rally Near King’s Palace