The Afrobeats singer was paid a whopping one million dollars to perform at 2022's Rolling Loud festival.

Iconic Nigerian singer, songwriter, and performer, Ayodeji Balogun, popularly known as Wizkid, has revealed how much he was paid to headline at this year's Rolling Loud festival in the city of Toronto, Canada.

The Grammy-nominated Afrobeats superstar will be headlining one of the Rolling Loud festivals in Toronto, which is scheduled to take place from September 9th to 11th, 2022, alongside Nigerian-British rapper Dave and American rapper Future. Nigeria's Rema is also billed to perform at the festival.

Big Wiz posted on his Instagram story that he was paid a whopping one million dollars to perform at the event, which is regarded as the world's largest hip-hop festival. He wrote:

Afro Nigga! $1 Million to pop out

The Wizkid-post comes a few days after co-headliner, Future, tweeted about being paid a million dollars for a show.

Sensational Nigerian music act BNXN (Buju) also confirmed the story after he shared a private conversation with Wizkid about the event online. 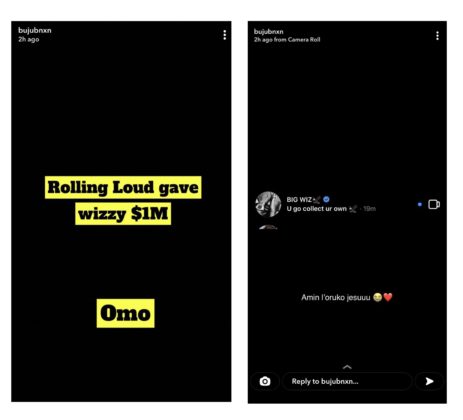 How I Lost My Twin Pregnancy ― Adesua Etomi

Vee Reveals Why She Wants To Be With Neo Forever; It’s A Wonderful Place To Be!

#BBNaija: Ozo Has Ruined His Chances With Nengi — DJ Kaywise

DanDizzy Replies To 105 Over A Freestyle Battle